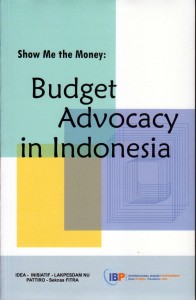 Budget advocacy in Indonesia grew out of the anti-corruption movement, starting in about in 2000. This is also the year in which Local Autonomy, which saw a strong and rapid move towards decentralization, was first implemented. Before then, corruption was concentrated at central government level. As local governments were given more authority, the corruption behavior also infected the 33 provinces and many districts and cities of the country. Local government executives and legislatures become nests of corruption. Civil society reacted through the anti-corruption movement. Corruption was also the initial focus of budget advocates. However, as fiscal decentralization was implemented, budget advocacy shifted to analyzing budget allocations from the perspective of basic rights fulfillment, as well as promotion of participatory, transparent and accountable planning and budgeting processes.

This book seeks to document the experience of budget advocacy organisations in tackling corruption and poor local budget management. It covers many areas of experience. For instance, the chapter by the National Secretary of Fitra, entitled Is it never enough? Advocacy on government regulation on extra income for local legislative members, shows that budget advocacy cannot ignore the legal aspects.

In another chapter of this book, PATTIRO shares their experience in promoting budgeting and implementation of local government budgets that aim at fulfillment of citizensâ€™ basic rights, particularly the right to education. Their advocacy experience is presented in the chapter entitled Fulfilling Education Rights through Local Budget Operational Aid for School.

Health rights also became a target of the budget advocacy movement. This issue has attracted concentrated attention from a range of civil society organizations, including Inisiatif Association, Bandung. Their effort in encouraging a budget policy that ensures access to affordable health service is presented in Health is Affordable And Accessible, Experience Of Health Rights Advocacy for the Poor In Bandung District. The local regulation on health insurance that they have already succeeded in winning is expected to be a starting point for accessible and affordable health services for the poor.

Of the many health problems in Indonesia, womenâ€™s reproductive health and childrenâ€™s health have become prominent problems. The high rate of maternal mortality, malnutrition in children under five year of age, and underweight newborns, are among the problems that have motivated women to engage in advocacy around the health budget. Womenâ€™s involvement in the primary and preventive care-focused joint health services post (known as Posyandu) inspired PATTIRO Surakarta to take up the advocacy challenge in this sector. Their experience is recorded in the chapter entitled Combining the Role of Communities with the Contribution from the APBD [local government budget] in the Posyandu in Surakarta City.

Promoting the role of marginal groups through budget advocacy on basic rights fulfillment is a concern of those who work with people with disabilities. SAPDA writes about about their experience in Yogyakarta Province in the chapter entitled The Rising up of People with Disabilities to Fight for Their Rights.

The same spirit is also found among members of farmer associations organized by KSPPM in North Tapanuli District. As an agrarian country, the majority of whose population works as farmers, Indonesia should pay more attention to farmersâ€™ welfare, and allocate adequate budget to encourage improvement of agricultural products. In Understanding Budget, Harvesting Welfare, KSPPM tells the story of farmersâ€™ struggles around the agricultural budget allocation.

In Indonesia, budget advocacy that seeks fulfillment of economic and social rights, as part of basic human rights, is accompanied by advocacy around the planning and budgeting process. In the budgeting cycle, citizensâ€™ civil and political rights should be exercised from the initial phase, namely the planning phase. In Indonesia, the fact that for decades the planning process has made provision for musrenbang, a forum for village and subdistrict-level development planning, has been used as a building block by many different budget advocacy organisations. The hope is that a stronger bargaining position of civil society and marginal groups would assist them in influencing the direction of budget policy. Participation, transparency and accountability are three key aspects in which civil society can seek improvement of the budgeting process.

Institutionalization of Participatory, Transparent and Accountable Process tells the story of the efforts of P3ML in Sumedang District in this area of work. By encouraging a local regulation on local planning and budgeting, P3ML sought to establish a legal basis for a regional indicative ceiling (so as to make participatory planning more realistic and thus help ensure that the chosen priorities are funded) and a musrenbang delegation forum in the local planning process. This local regulation has become a reference point for many other regions in Indonesia.

the local government budget. FITRA Riau tells of their experience in such an effort in the chapter entitled Civil Society Movement to Oppose Local Budget Plan 2007 of Riau Province for not being Pro-Poor.

Encouraging and building the capacity of pressure groups to engage in budget allocation advocacy is an effective method. Lakpesdam proves this, as we see it in When People and Ulema Unite: Experience in Opposition against Simpemdes Program in Cilacap District, Central Java Province. Using Bahtsul Masail, an ulema forum for decision-making on specific problems, a budget problem in Cilacap District was discussed and partially solved. This experience can be an effective model for other regions in strengthening advocacy efforts.

In addition to encouraging involvement of religious groups in the planning and budgeting process, some civil society organizations that focus on gender budget issue have encouraged women groups to participate in the planning and budgeting processes. They have aimed to achieve a women participation quota of 30% or more in political participation. One way in which this has been done is through a mechanism called Womenâ€™s Musrenbang. IDEAâ€™s experience, presented in Promoting Women Participation in Sub-District Development Planning in Bantul District, Yogyakarta Province, reflects this participation model.

The chapters described above come together in this book entitled Show Me the Money: Budget Advocacy in Indonesia. This bilingual book portrays some of the diverse experiences of budget advocacy organisations. We hope that the success stories, challenges, and changes achieved, may inspire readers both inside Indonesia and in other countries to understand budget advocacy in Indonesia and to learn from and build on our experience.

Five budget advocacy organisations â€“IDEA, INISIATIF, LAKPESDAM NU, PATTIRO, and National Secretariat of FITRAâ€“ are the joint authors of this book. These five organizations engaged in a joint process supported by the

Enthusiastic budget advocates often find it difficult to write down their experience because this work sometimes seems less important than doing the advocacy itself. The hard work of the writers in compiling and describing their memories therefore deserves some words of appreciation.

We really thank the core team of five organization for their collaboration, and the writers, editor and translators who worked together to develop and publish this book. A special thanks for Debbie Budlender, who â€“ as part of the Partnership Initiativeâ€™s support â€“ has patiently and carefully guided us with sharp recommendations and questions on the writing process. Last but not least, International Budget Partnership also deserves our very big thanks.

We hope that this book may contribute significantly to budget advocacy in Indonesia, as well â€“perhaps â€“ to advocacy in other countries.

PATTIRO, and National Secretariat of  FITRA

Show Me The Money. Budget Advocacy in Indonesia